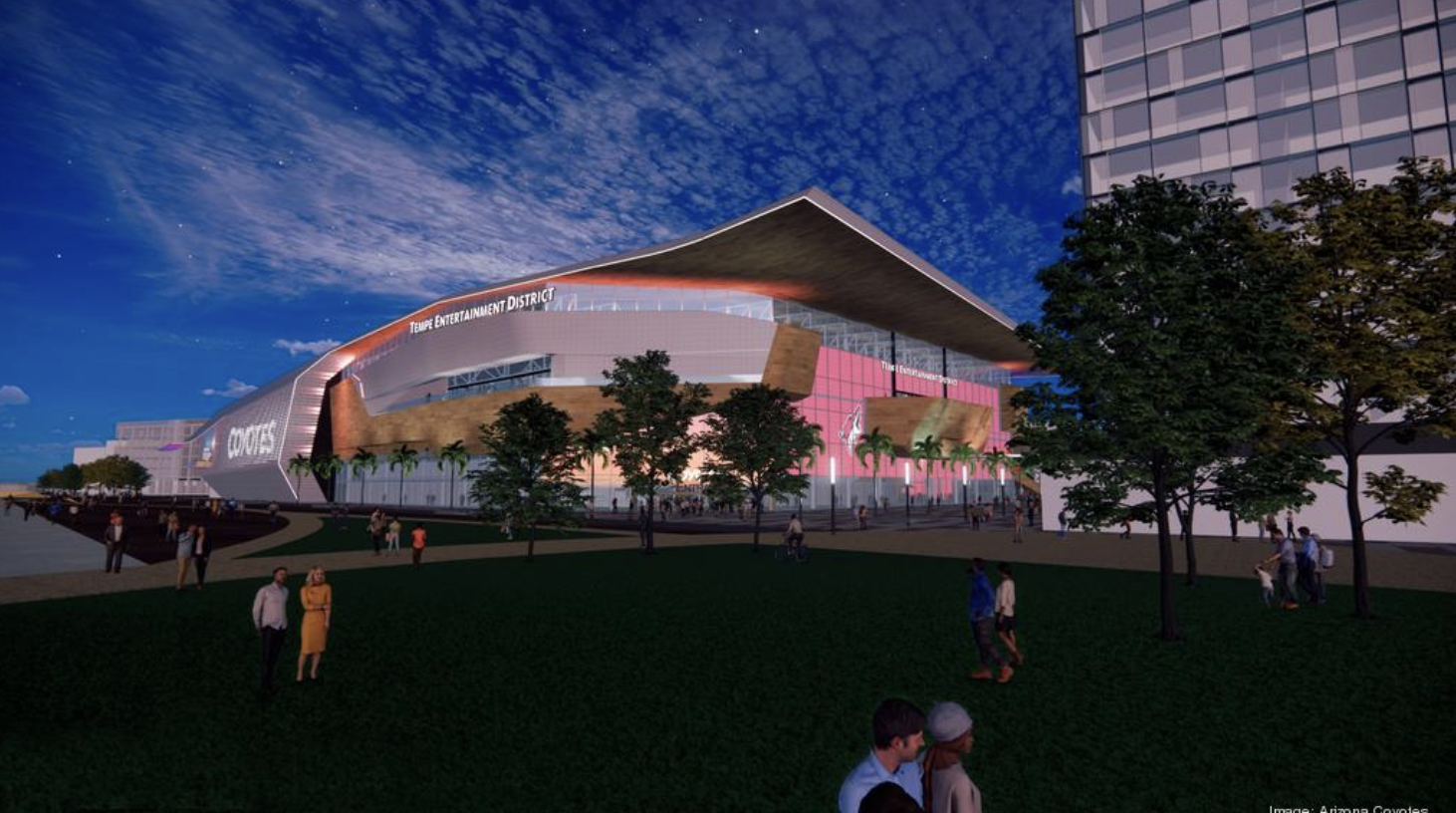 If Tempe allows the Arizona Coyotes to build their proposed arena, entertainment district, hotels, office buildings and luxury apartments, it could cost Phoenix Sky Harbor International Airport millions of dollars a year, according to Phoenix officials.

During an April 21 Phoenix Aviation Advisory Board meeting, Jordan Feld, Phoenix’s deputy aviation director, said that the airport, along with an outside economist, ran a study to see how Sky Harbor could be impacted by the construction phase of the proposed $1.9 billion project.

The study also suggested that there would be serious delays at Sky Harbor and that the airport’s capacity could ultimately be limited. Furthermore, the study said that, because of the impact on the airport, the larger Phoenix economy could lose $264 million a year.

The main factor leading to the financial impact and annoyance for travelers would be the cranes being used to build the project in Tempe.

The Coyotes have proposed to build the Tempe Entertainment District (TED) on 46 acres at the northeast corner of Priest Drive and Rio Salado Parkway in Tempe — currently a city dump. The proposal was submitted in the summer of 2021, but the city of Tempe has yet to decide on it or even make the proposal public. The Coyotes have been showing a version of the proposal around town, and based on proposed building and crane heights, Feld and other airport officials have determined that cranes could be higher than some pilots and airlines would prefer. 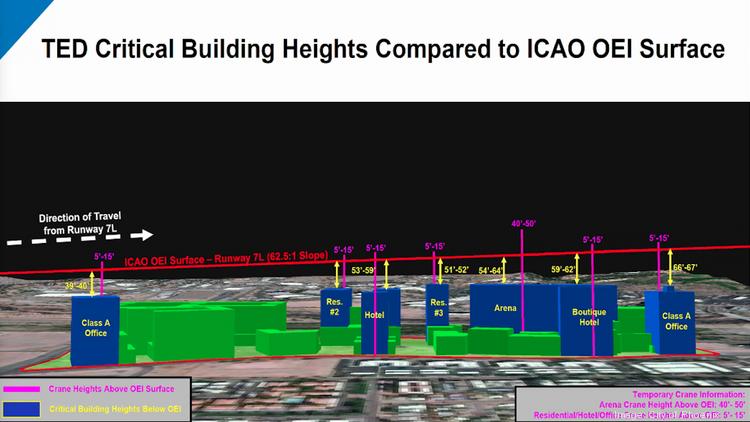 Feld showed a graphic during the meeting that illustrated how cranes could be five to 50 feet above the one engine inoperative surface — a predetermined height that gives pilots an idea of how they can land if the aircraft becomes damaged in a serious way.

“We recently met with the Airlines Pilots Association and showed them this graphic, and they were very concerned,” Feld said.

Feld said that airline officials feel the same way. In February, Jay Leitner, the principal engineer at American Airlines, the largest carrier at Sky Harbor, said that the proposed development and cranes associated with it could result in a significant reduction in payload as well as passenger restrictions, especially during summer months when the air is heavier, and airplanes need more room to take off.

“Seventy percent of long-haul flights are going to request the north runway to depart,” Feld said. “That creates a delay factor because you have to taxi the airfield longer and the arrival stream on that north runway is now delayed.”

The Coyotes issued a statement to the Business Journal in response to the city's study.

"We are significantly confused by the assumptions that seem to underpin Sky Harbor's estimate of the economic impacts of TED's temporary construction cranes," the statement said. "As a result, we are urgently requesting any data that they might be using, since it appears their assumptions do not reflect the facts of our constructon plan. In any case, however, this so-called analysis excludes the net new economic benefits that TED will deliver to the county — benefits that include $5.9 billion of new spending, $12.5 billion of net new direct output, 8,700 new jobs and $225 million in net new tax revenue over the next 30 years."

Because the project has yet to be approved or even publicly discussed by the city of Tempe, dates and timing are unknown, but Feld said construction on a project of this size could last two to five years.

But that doesn’t mean cranes would be a problem the entire time. Chad Makovsky, the director of Sky Harbor said during the meeting that he anticipates the Coyotes to propose taking the crane down during certain points of the day or trying to limit how long they must be at the tallest point.

“There are ways to mitigate,” Makovsky said during the April 21 meeting. “But that doesn’t address the point of whether pilots will fly over it.”

After a lengthy dispute with the city of Glendale, the Coyotes are winding down the team's final season at Gila River Arena this month. The team has inked a deal to play in the new 5,000-seat multisport arena under construction on the University of Arizona Tempe campus starting with the 2022-2023 season.

The negative financial impact on Sky Harbor is just the latest in a number of problems Sky Harbor and the city of Phoenix have presented in conjunction with the Coyotes proposal. The Coyotes have pointed out time and time again that none of their proposed buildings are violating any height restrictions and that they are willing to work with authorities to make the project happen.

Earlier this month the FAA sent a letter to the city of Tempe about concerns the federal agency has about putting apartment buildings so close – just under two miles – from the end of a runway.

The FAA’s main concern is the noise the planes would cause for residents. It also said that because of the proximity the city and the developer would have to take certain precautions and that the FAA and other federal funds could not be used in these efforts.