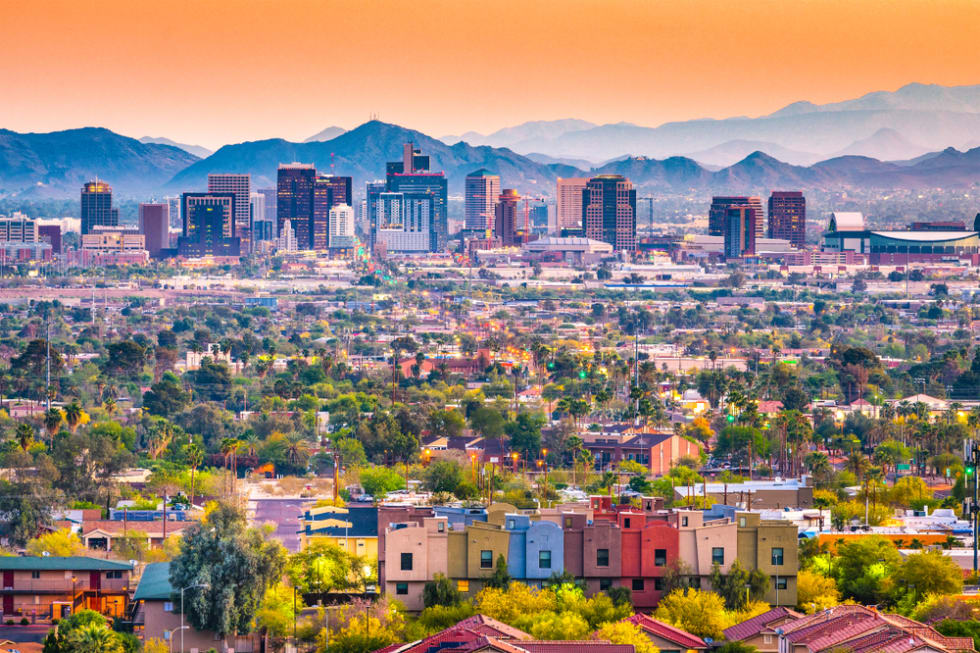 Valley real estate agent Andrea Crouch listed off these states as she flicked through some of her recent home sales. While a large percentage of her buyers are moving to the Phoenix metro from Southern California, the longtime agent with The Crouch Group at EXP Realty said in a recent interview that’s far from being the only place.

More buyers, over the last two years, are moving to the Valley from across the country because they can now work remote from anywhere and are picking the Phoenix area for its lower cost of living and lack of Covid restrictions, Crouch said.

“That’s just been an upside [that came out of the pandemic], having that flexibility for work,” she said, “and being able to be here, which we love.”

In the two tax filing years prior to the pandemic, though, the biggest percentage of in-migration into Maricopa County was from five counties in Southern California, according to U.S. Census Bureau data. Going deeper, the other top counties for in-migration included Cook County, Illinois; Clark County, Nevada; King County, Washington; and Bernalillo County, New Mexico.

With a fast-growing population and a more metered approach to residential construction since the region was burned in the Great Recession, demand for houses and apartments has greatly outpaced supply, and the Valley’s home prices and rents have grown faster than almost any other metros in the country.

Phoenix ranked third in the country for increases in home values since March 2020, with a 47% jump, also according to Zillow data analyzed by American City Business Journals.

“There are so many more people moving here than there are houses available to sell,” Sindy Ready, associate broker at RE/MAX Excalibur and treasurer for the Arizona Association of Realtors, said. On a given day in early February, there were just over 5,000 homes on the market in Maricopa and Pinal counties, across all price ranges, she said. In a normal market, that number is about 35,000.

“All of the experts are saying this is not a bubble, and there will continue to be price increases over the next three to five years,” Ready said, adding that the median home price projected in Phoenix by the end of the year is over $517,000.

Those 5,000 available homes are across all submarkets of Maricopa and Pinal counties, meaning the choices are even slimmer for buyers looking for a specific area of the Valley.

Ready’s team specializes in relocations, and she also is seeing a rise of buyers from Washington. She is even seeing buyers already moving to the Valley for jobs related to the Taiwan Semiconductor Manufacturing Inc. plant under construction in north Phoenix and its suppliers.

“Right now, a good portion of buyers are coming from California,” she said. “The cost of living is so much better over here. That’s a big push."

In terms of the lack of supply of houses, Ready said supply chain delays are contributing to slowing down the flow of newly completed houses. She said she recently visited a development under construction in Mesa where there were already over 200 people on the waitlist and the builder has only been able to release two or three homes a month.

Alan Maguire, president and principal economist for the Maguire Company, said Phoenix’s comparatively lower-priced housing has brought people from more costly markets, which increased demand and chipped away at the supply, and an influx of investors buying homes to rent out or hold as a hedge against inflation has also taken houses that would have been available for families.

Maguire said he does expect the housing market to moderate over time, as commodity prices come down and production constraints from the pandemic ease.

“Arizona has a very robust homebuilding and construction industry,” he said. “I expect us to catch up, but it will take a couple of years for us to catch up. We have extraordinary demand at a time we have limited supply.”

Phoenix’s affordability factor might not be as powerful an advantage as it once was in attracting people and businesses, Maguire said, but the number one reason why people relocate is for a job.

“If they get a good job they are willing to sort of struggle for six months to a year before their housing is what they want it to be,” he said.

Arizona and Maricopa County have seen success in adding jobs and growing its share of outside investment that comes with having fast-growing businesses in the metro. The Valley had 144 venture capital deals in 2021, up from 114 in both 2020 and 2019 and 85 in 2018, according to Pitchbook data analyzed by American City Business Journals.

“The growth story in Phoenix has been decades in the making,” Kevin Calihan, executive vice president at CBRE Group Inc. said. “Phoenix was growing long before the pandemic and continued to grow through the pandemic. We are reaping the benefits of a decade-plus of companies entering the market.”

One of the major factors Calihan’s clients, which are generally corporations of various sizes, look for when selecting a new site for an office is the availability of talent, as well as the cost of that talent, he said.

The number of companies in Arizona reaching “unicorn” status, meaning they are valued at a billion dollars or more, has grown quickly in recent years, Chris Camacho, president and CEO of the Greater Phoenix Economic Council said.

“In the last five years we have seen marked change for out-of-state (venture capital), much like they had seen in Austin and Seattle before,” Camacho said.

The business momentum, overall growth and success of the startup community has grown Phoenix’s reputation among venture capitalists, he said.

“It has put us on the map in a really big way,” Camacho added. “Success begets success, especially in the capital world. Once you see the scales tip in your direction people take notice.”