SHADOW SUPPLY IS THE ACHILLES’ HEEL OF 2020 HOUSING HEROICS SHADOW SUPPLY IS THE ACHILLES’ HEEL OF 2020 HOUSING HEROICS

Housing has emerged as a hero amid the economic crisis triggered by the COVID-19 pandemic.

After declining initially in response to the pandemic, demand for housing has quickly rebounded and is now back above pre-pandemic levels.

Purchase mortgage applications increased 27 percent from a year ago in the week of August 14, the 13th consecutive week with a year-over-year increase, according to the Mortgage Bankers Association. That demand translated into an 8.7 percent year-over-year increase in home sales in July, following three consecutive months of double-digit decreases, according to data from the National Association of Realtors (NAR).

The increase in sales in July came despite a 21 percent decline in the inventory of existing homes for sale. July marked the fourth consecutive month where inventory decreased at least 18 percent on a year-over-year basis.

The combination of rising demand and declining inventory has triggered increasing bidding wars and accelerating home price appreciation, particularly in less densely populated pockets that have become the darlings of the housing market during the pandemic.

There is at least one weak spot in the heroic housing market of 2020: a shadow supply of housing being held off the market — to some degree because of government intervention. This is resulting in a growing pool of pent-up supply that could come back to haunt the housing market down the road when the pandemic-fueled exuberance for real estate dies down.

Two types of shadow housing inventory are growing, both in large part because of the pandemic-induced crisis. The first is existing home supply which, as mentioned earlier, has been down more than 18 percent on an annual basis for four consecutive months. Even prior to the COVID-19 pandemic, existing home supply was an issue, down an average of 11 percent annually in January, February and March. But the supply decrease accelerated after the pandemic declaration as home sellers shied away from listing their homes in such a volatile environment. 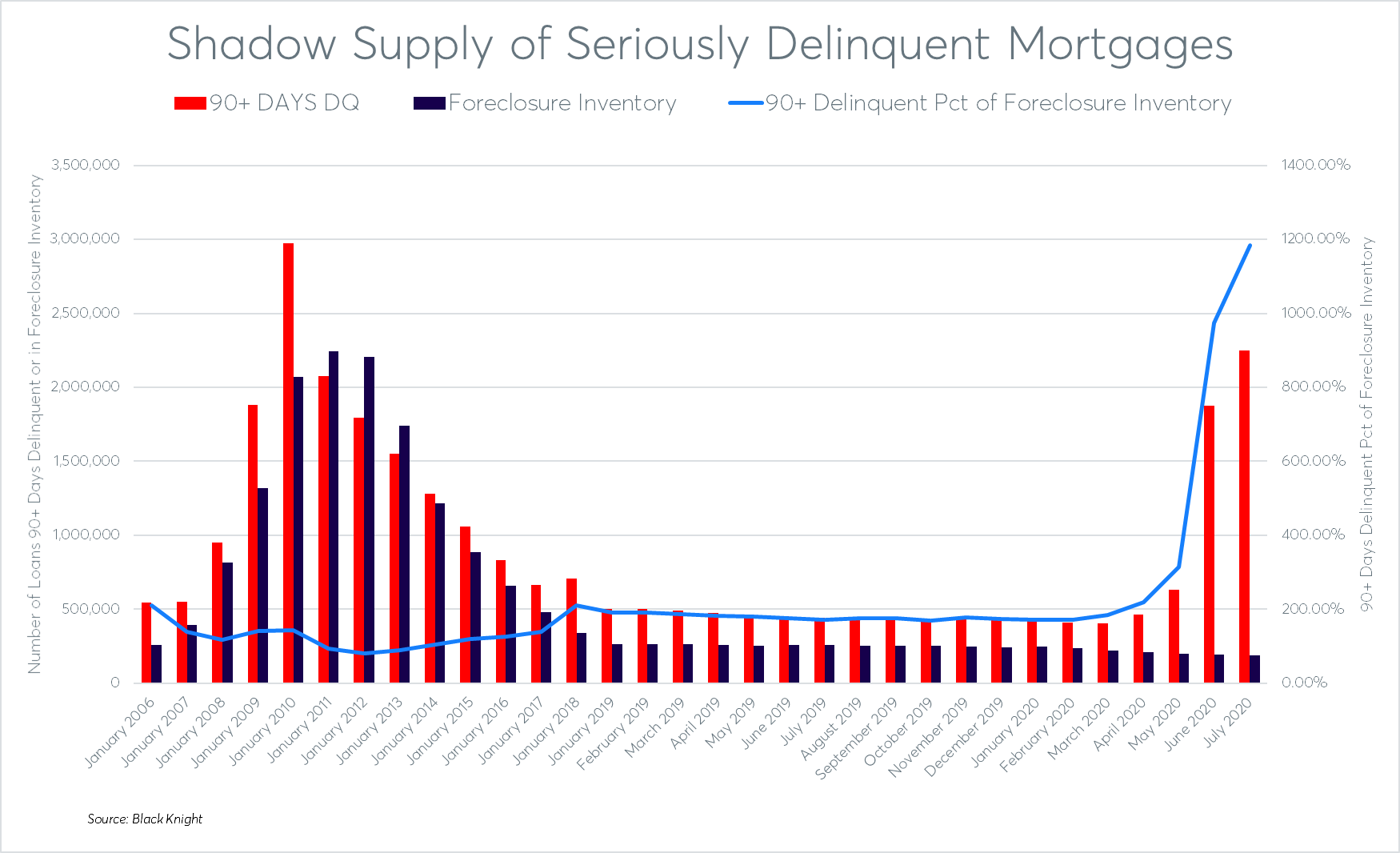 The more concerning shadow supply is a quickly ballooning number of delinquent mortgages.

Data from Black Knight shows 3.36 million borrowers were 30 days or more delinquent as of the end of July — an increase of nearly 2 million since January. These delinquent mortgages — most of them now at least 90 days delinquent — are being held back from foreclosure sale by the nationwide foreclosure moratoria originally enacted by the CARES Act and extended by Fannie Mae, Freddie Mac and the Federal Housing Administration. These three agencies account for nearly of all active mortgages, according to data from Inside Mortgage Finance. In addition, many lenders are following the federal government’s lead and not foreclosing even on privately owned loans that are not subject to the foreclosure moratoria. 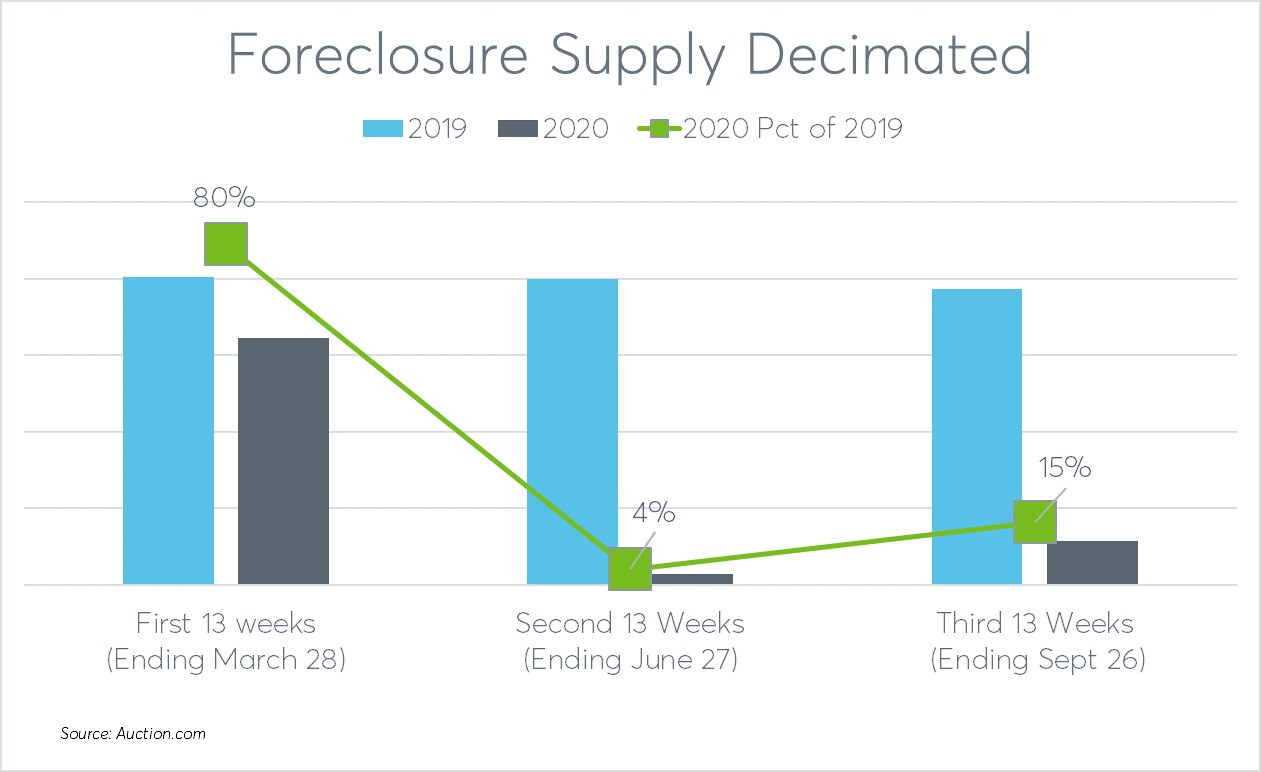 A foreclosure moratorium acts as a rudimentary, but effective, Band-Aid used early in the aftermath of a crisis to stop the bleeding. That much-needed approach is correctly being used in the early aftermath of the COVID-19 crisis to make sure homeowners impacted by the pandemic are not blindsided by the loss of their homes. At a macro level, the foreclosure moratoria also serve to keep the housing market — and broader economy — from being blindsided by a tsunami of foreclosures.

But Band-Aids don’t typically work well as long-term remedies, and neither do foreclosure moratoria

First, the moratoria’s initial cut-off of foreclosure supply is no longer necessary to prevent a wave of foreclosures given the robust mortgage forbearance programs now in place. Those forbearance programs, also available for all mortgages backed by Fannie, Freddie and FHA, allow homeowners impacted by the pandemic to stop making mortgage payments for up to 12 months and still avoid the negative ramifications of a dinged credit score and foreclosure.

The vast majority — 85 percent, according to the latest Black Knight numbers — of mortgage borrowers who became delinquent after the pandemic declaration have taken advantage of the forbearance programs. Meanwhile, 45 percent of borrowers who were delinquent before the pandemic declaration are in forbearance. These two numbers suggest that while most delinquent mortgages are in forbearance, a substantial number are not — representing a backlog of distress that will eventually need to be dealt with when the moratoria are lifted.

This backlog of distress also represents restricted retail housing supply. That’s because foreclosure sales have one of two outcomes: a sale of the distressed property to a third-party buyer (typically real estate investor); or a transfer of the property back to the foreclosing lender, also known as an REO (real estate owned). In either of the two outcomes, the property typically ends up back on the retail market following renovations — either as a resale by the investor or lender, or as a rental.

Even in a normal, healthy market, foreclosure sales represent a sizable source of housing stock that is newly available for retail buyers and renters. An Auction.com analysis of public record data from ATTOM Data Solutions shows more than 244,000 single family homes and condos completed a foreclosure sale in 2019. That was down significantly from a peak of more than 1 million completed foreclosure sales in 2010, but it still represented about one-fourth of the 900,000 single family housing units completed by new home builders in 2019, according to the Census Bureau.

While foreclosure sales don’t represent a source of completely brand-new housing supply as do newly constructed homes, they typically are the beginning of a process that returns a distressed home to the retail marketplace after an extended period in which the home was unavailable to retail buyers and renters due to its poor condition. In this context, both new housing completions and completed foreclosure sales represent sellable or rentable housing stock being added to the retail marketplace.

Based on this data, it can be argued that the foreclosure moratoria are holding back between one-fifth and one-third of newly available housing stock for retail buyers. In the short term, the benefits of the foreclosure moratoria outweigh the costs of holding back supply — while also helping the housing market perform gravity-defying heroics in 2020. But if supply is cut off for too long, it could hobble the housing market in the years to come.